*May update- made it to Novosibirsk* Hi there fellow cyclists, i am undertaking a  3 month ride from Moscow to Ulaanbaatar, Mongolia, mid April to July. I would love to hear from anyone who can give us some advice about what towns to head towards, what roads to use (and NOT use maybe) and any other general information you think would be useful to three friends cycling across this huge and daunting landscape. You can contact me here on this forum (great idea WS) or @M2Bbybike. The map below is from www.cycleroute.org (a great resource site) and in case you are wondering, yes, the elevation at the Mongolian border is a little daunting! 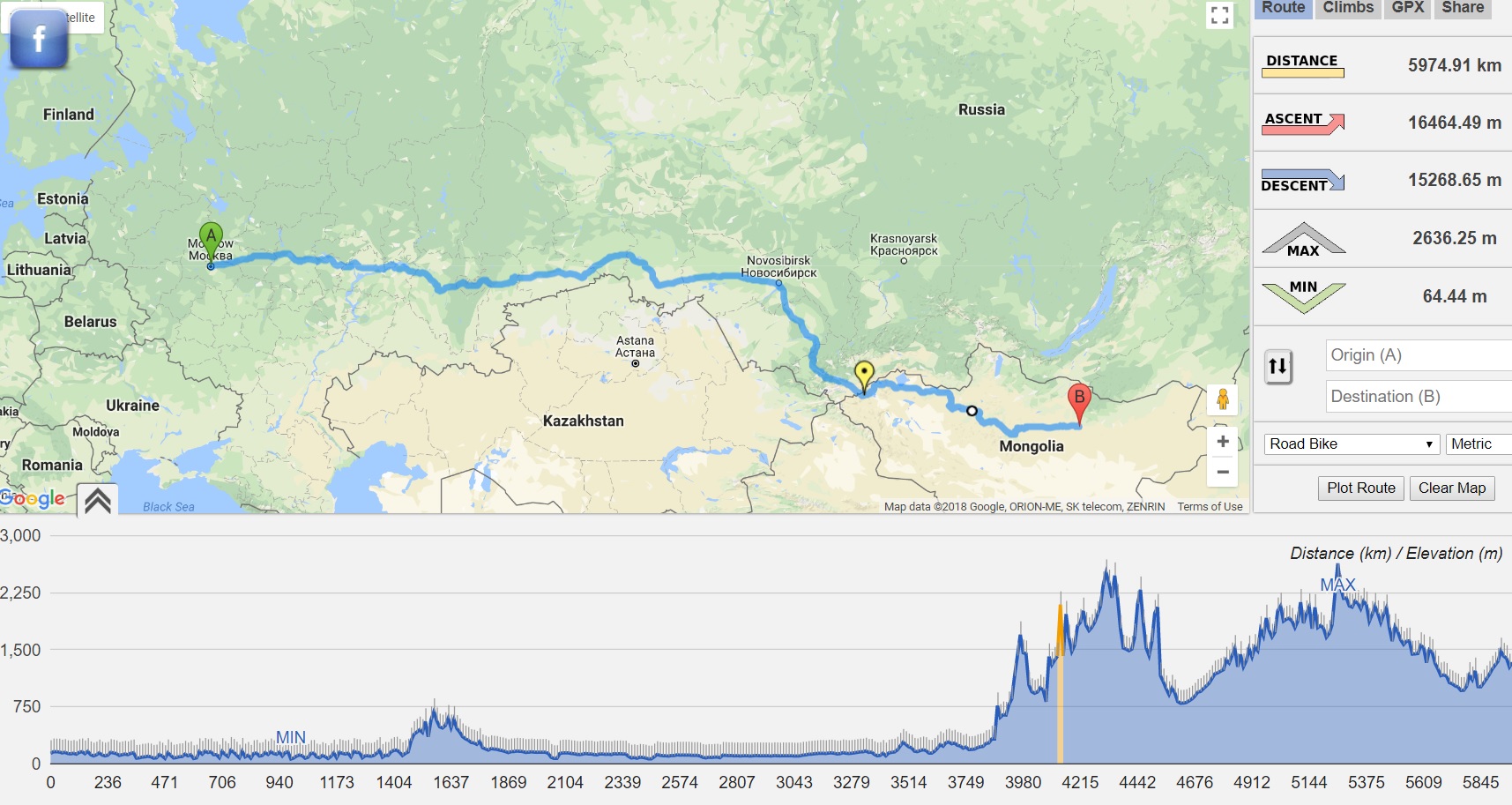 The main road from Moscow and

The main road from Moscow and up to Novosibirsk pretty boring and has a lot of traffic. Mostly truck traffic!.
Try to get up north road. Yaroslavl - Kostroma - Kirov - Perm - Yekaterinburg - Tyumen - Omsk.
Also would be best choice to skip Omsk - Novosibirsk - Barnaul part since it is very dangerous. Try to go through Kazakstan there.

Hi Arkady, Tatyana, thanks for your reply. I had a look at going via Kazakhstan when we got to above Astana, but all the advice i could fiund about border crossing indicated it was not possible at all. Do you know of any specific route or passage? thanks again!

How would it not be possible

How would it not be possible at all? RU-KAZ border crossings are pretty hassle-free. But my advice is that If you cross from Russia to Kazakhstan, then do it south of Chelyabinsk (Troitsk is the name of the small town there where you cross) or at the border crossing near Petropavlovsk. This will put you on a road through the country that has a decent amount of civilization. Entering KAZ further west, however, would mean going through a lot of seriously barren territory.

The difficulty with cycling across Kazakhstan is that most Western nationalities only get 15 days on arrival, generally too short to both cycle and see anything. However, you can request a 30-day Kazakh tourist visa beforehand at a consulate in Ukraine or Russia, they are generally issued without hassle in 2–3 days.

Hi Christopher, thanks for those suggestions.i will look into it definitely. It did not seem possible because of regions, and some of the advice i was reading about border crossings of that area on a veru helpful; webiste called caravanistan (www.caravanistan.com/border-crossings/kazakhstan) From my understanding, and i may be wrong.it seems i would need to cross into China, or back into Russia to get into Mongolia, which i don't have a Chinese visa. Some of the crossings seem bilateral only for nationals of either country and not tourists.Also, i would be lucky if i try it, as British passport holders do not need a visa and have 30 days travel, up until December 2018 (www.gov.uk/foreign-travel-advice/kazakhstan/entry-requirements). Many thanks!

The two RU-KAZ border crossings I mentioned are open to foreigners. But yes, going into KAZ would require then transiting China, and getting a Chinese visa (especially if you intend on crossing the sensitive Xinjiang region, which you should never actually tell the Chinese consulate) is a lot of hassle.

There are reasons that the

There are reasons that the vast majority of Europe–East Asia tourers avoid Russia, choosing instead to go through Turkey, Iran, and Central Asia. Getting a 3-month visa for Russia is a hassle. Drivers can be aggressive and they are not used to bikes on the road.. Police can be very bothersome and you are likely to get hit up for fines for some supposed or real infraction at least once. (And as someone who has hitchhiked tens of thousands of km in Russia alone, you would just not believe how many drunk drivers there are.) No offense, but how much research did you actually do before deciding on this route?

... and don't forget about drunk bears with balalayka, hahaha.
Have no idea is that was a stereotypes or designfull BBCs propaganda against Russia, but actually drivers are aggressive in Central Asia, Turkey and Iran as well. At least no less.
The most trouble in Russia that is too little roads here. As a result is a big traffic and bad roads surface on those that are available.

Last summer I went with my own car (Dutch numberplate) through Russia 3000 km (from St Petersburg to Vladikavkaz and then across the border to Georgia), and I have never had ANY problems with police! I hear from other people that IN THE PAST asking money for supposed or real infraction happened sometimes, but most people say that corruption among the policemen-on-the-street is much less than it used to be.

Hi Juuk, thanks for your comment. I hope things have improved from what was said about the past! As i mentioned in my comment above, with Russia hosting the world cup, now is perhaps not the time for an opportunist official to invent spurious permit taxes and spring them on tourists if that is what happened in the past to some people?Many thanks again.

Hi Christopher, thanks for your reply. I take your observations on board, from the sounds of it you are very experienced in traveling through this area. My planning has invloved map work, checking average weather temperatures for the time of year, prevailing wind direction, governmnet website advice on traveling to Russia and Mongolia, copious travel websites, including researching previous blogs of cyclists who have ridden in either direction, especially around the Altai region, contacting them and asking questions about what to expect. I am also taking into consideration the fact the world cup is being hosted during our ride.  I hope this will mean less officialdom syndrom from police, and less curiosity from officials. Russia is desperate to host and desperate to be seen to host  the world cup safely and make travel for foriegners convenient. We hope to be able to ride (no pun) this good will (though it will be in short supply for the British no doubt given everything, but you can only control so much!) I also contacted the Russian Cycle Touring Club (RCTC) www.rctc.ru and asked for suggestions for roads with less traffic, especially getting out of Moscow, and their reply was very helpful. I have also had some russian language lessons online using skype, with VerbalPlanet (www.verbalplanet.com) to learn some emergency Russian! veyr good and easy to do (not learning the Russian though!) plus youtube lessons also (little by little) Yes, the drunk drivers...I would be lying if i said the roads, and drivers under the influence in particular, did not concern me a bit. I read about the very sad hit and run of the peace cyclist Ron McGerity in 2014 by a drunk driver (http://tass.com/russia/742292). Drunk drivers are in every country i've been in, and only yesterday there was a report of a British cyclist being hit by a drunk driver in Meonroca, Spain (www.cyclingweekly.com/news/latest-news/british-cyclist-killed-suspected-drink-driver-menorca-375196) It is something i am definitely not complacent about anywhere i ride. We will be off the road before it gets dark and will pay extra attention arriving and leaving cities, as this is nornally where traffic builds up. However with all your experience, can you make any suggestions of any area or region in particular? We may need to wildcamp, and it would be great if you could offer any tips on that also. Many thanks again!

"Drunk drivers are in every

"Drunk drivers are in every country i've been in."

As I said, Russia is a whole different level. When hitchhiking in Russia I have commonly had to wave on a series of drivers because every single one that stopped had alcohol on his breath.

"We may need to wildcamp."

I would not recommend wild camping anywhere there is an actual settlement nearby. Generally in rural Russia it is safer to simply chat with people at a village shop and someone will let you sleep in their home or at least pitch your tent on their compound. The difficulty is doing this without getting dragged into an all-night drinking session where you can’t say no without offending your host, and which also means you don’t get much actual sleep before you are sent on your way early the next morning.

On a related note, I strongly recommend avoiding drunk people in general in rural Russia as much as you can. Sadly, they can very quickly pivot from friendly and amusing to aggressive, even violent. The same is true of Kazakhstan and Mongolia.

"We will pay extra attention arriving and leaving cities, as this is nornally where traffic builds up."

It is also where traffic slows down, because there are DPS (traffic police) posts around cities. I would feel the greatest unease cycling in Russia on isolated rural roads where no one obeys speed limits and, as I mentioned, there are drunk drivers.

Thanks again Christoper, i agree about the open roads and lack of surveillance or police deterrent, and with nothing to disincentivise drink driving in the rural areas, the problem won't go away overnight. I hope to mix uop our accomodation, with some helpful WS hosts, couchsurfing, and yes, kind offers of using a garden or back yard.

Re the vodka issue. Yes, i am aware of this also and hence the need to avoid the over enthusiastic offer of hospitality. The worst experience i have read so far is from a world touring Irish cyclist who had a really horrible experience in Ulgi, Mongloia, having crossed the border from Russia. Read the blog yourself here https://www.crazyguyonabike.com/doc/page/?o=1mr&page_id=438320&v=Ae.